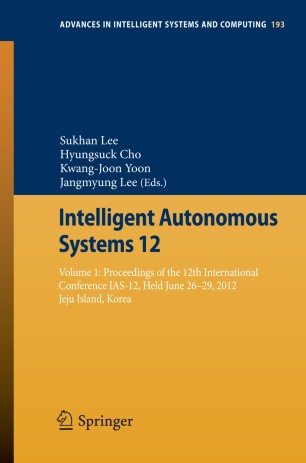 Part of the Advances in Intelligent Systems and Computing book series (AISC, volume 193)

Intelligent autonomous systems are emerged as a key enabler for the creation of a new paradigm of services to humankind, as seen by the recent advancement of autonomous cars licensed for driving in our streets, of unmanned aerial and underwater vehicles carrying out hazardous tasks on-site, and of space robots engaged in scientific as well as operational missions, to list only a few. This book aims at serving the researchers and practitioners in related fields with a timely dissemination of the recent progress on intelligent autonomous systems, based on a collection of papers presented at the 12th International Conference on Intelligent Autonomous Systems, held in Jeju, Korea, June 26-29, 2012. With the theme of “Intelligence and Autonomy for the Service to Humankind, the conference has covered such diverse areas as autonomous ground, aerial, and underwater vehicles, intelligent transportation systems, personal/domestic service robots, professional service robots for surgery/rehabilitation, rescue/security and space applications, and intelligent autonomous systems for manufacturing and healthcare. This volume 1 includes contributions devoted to Autonomous Ground Vehicles and Mobile Manipulators, as well as Unmanned Aerial and Underwater Vehicles and Bio-inspired Robotics.