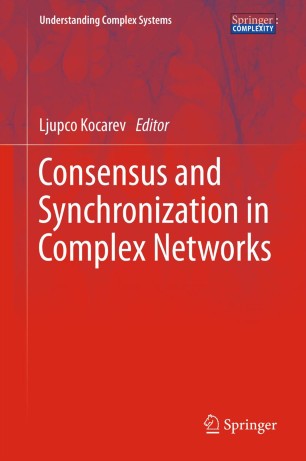 Consensus and Synchronization in Complex Networks

Synchronization in complex networks is one of the most captivating cooperative phenomena in nature and has been shown to be of fundamental importance in such varied circumstances as the continued existence of species, the functioning of heart pacemaker cells, epileptic seizures, neuronal firing in the feline visual cortex and cognitive tasks in humans. E.g. coupled visual and acoustic interactions make fireflies flash, crickets chirp, and an audience clap in unison.

On the other hand, in distributed systems and networks, it is often necessary for some or all of the nodes to calculate some function of certain parameters, e.g. sink nodes in sensor networks being tasked with calculating the average measurement value of all the sensors or multi-agent systems in which all agents are required to coordinate their speed and direction. When all nodes calculate the same function of the initial values in the system, they are said to reach consensus. Such concepts - sometimes also called state agreement, rendezvous, and observer design in control theory - have recently received considerable attention in the computational science and engineering communities. Quite generally, consensus formation among a small group of expert models of an objective process is challenging because the separate models have already been optimized in their own parameter spaces.

The book is aimed at all scientists and engineers, graduate students and practitioners, working in the fields of synchronization and related phenomena.