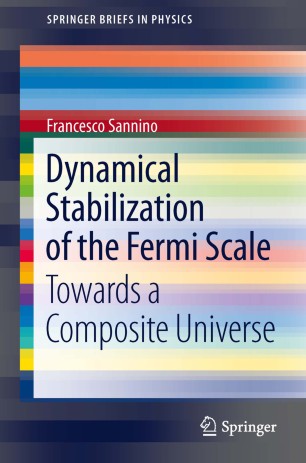 Dynamical Stabilization of the Fermi Scale

Towards a Composite Universe

This lecture-based, concise primer introduces and summarize basic features associated with dynamical breaking of the electroweak symmetry in elementary particle physics.
In particular, the phase diagram of strongly-coupled theories as function of the number of colors, flavors and matter representation, playing a fundamental role when trying to construct viable extensions of the standard model, are examined for SU(N) gauge theories with fermionic matter transforming according to arbitrary representations of the underlying gauge group. We will further discuss how the phase diagram can be used to construct unparticle models and then review Minimal Walking Technicolor (MWT) and other extensions, such as partially gauged and split technicolor.
Eventually, the unification of the standard model gauge couplings will be revisited within technicolor extensions of the standard model.
A number of appendices will help student and newcomers to the field reviewing some basic methods and provide them with useful details.