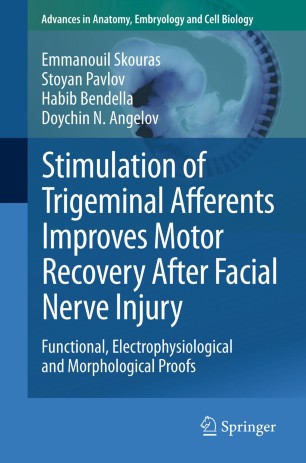 Its is commonly known that the recovery of mimic functions after facial nerve injury is poor: a successful regrowth of the lesioned axons to their muscle targets is compromised by (i) poor navigation of the growth cones and excessive collateral axonal branching, (ii) abnormal exchange of nerve impulses between adjacent regrowing axons and (iii) insufficient synaptic input to the facial neuronal cell bodies in the brainstem. As a result, axotomized motoneurons become hyperexcitable and unable to discharge. Since the improvement of growth cone navigation and the reduction of the ephaptic cross-talk between axons both turn out be impossible at present, the authors focused their efforts on the third detrimental component and proposed that an intensification of the trigeminal input to the axotomized and electrophysiologically silent facial motoneurons might improve the specificity of reinnervation. To test their hypothesis, they compared behavioral, electrophysiological and morphological parameters after single reconstructive surgery on the facial nerve (or its buccal branch) with those obtained after identical facial nerve surgery but combined with indirect (removal of the contralateral infraorbital nerve, ION) or direct (massage of the mimic muscles) stimulation of the ipsilateral ION. They found that in all cases any trigeminal stimulation was beneficial for the outcome by improving both the quality of target reinnervation (reduced polyinnervation of the motor endplates) and the recovery of vibrissal motor performance (as judged by video-based motion analysis). Based on these results, the authors conclude that trigeminal stimulation is a non-invasive procedure with immediate potential for clinical rehabilitation following facial nerve reconstruction.