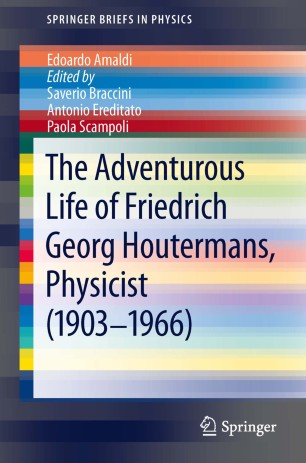 The physicist Friedrich Houtermans (1903-1966) was an essential promoter and proponent of the development of physics in Berne. He introduced a number of activities in the field of elementary particles, with a special focus on the physics of cosmic rays, and important contributions in applied physics.

This biography of Houtermans was written by Edoardo Amaldi and was almost finished just before his unexpected death in 1989. The editors have only corrected typographical errors and have introduced only minimal text changes in order to preserve the original content. Additionally they have collected and included unpublished pictures and memories from Houtermans’ students and collaborators. The text is the result of a thorough and intensive study on Houtermans’ life and character carried out by Edoardo Amaldi. It is more than a biography, since the figure of Houtermans is set in a historical perspective of Europe between the two world wars. This book will be of great interest to historians and historians of science.