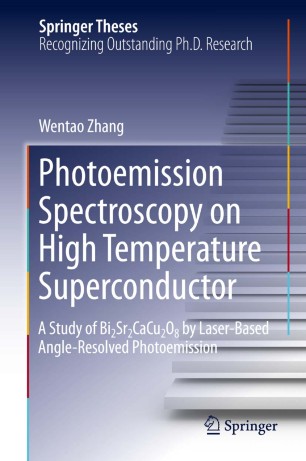 A Study of Bi2Sr2CaCu2O8 by Laser-Based Angle-Resolved Photoemission

This book mainly focuses on the study of the high-temperature superconductor Bi2Sr2CaCu2O8 by vacuum, ultra-violet, laser-based, angle-resolved photoemission spectroscopy (ARPES). A new form of electron coupling has been identified in Bi2212, which occurs in the superconducting state. For the first time, the Bogoliubov quasiparticle dispersion with a clear band back-bending has been observed with two peaks in the momentum distribution curve in the superconducting state at a low temperature. Readers will find useful information about the technique of angle-resolved photoemission and the study of high-temperature superconductors using this technique.
Dr. Wentao Zhang received his PhD from the Institute of Physics at the Chinese Academy of Sciences.