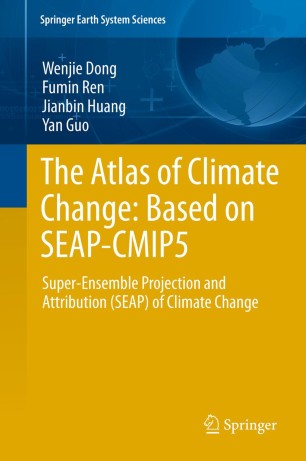 The Atlas of Climate Change: Based on SEAP-CMIP5

"The Atlas of Climate Change—Based on SEAP-CMIP5" is intended to satisfy readers’ curiosity: how will our climate system change over the next 100 years? It is the first showcase for the state-of -the-art earth system models that released their CMIP5 simulations for the IPCC AR5.The atlas focuses on both the past climate system change from 1850 and the projection of the future climate system change to 2100 using the RCP2.6, RCP4.5 and RCP8.5 scenarios based on climate models. This provides the research and application community interested in the impact of climate change on fields such as agriculture, ecosystem, environment,water resources, energy, health, economy, risk governance and international negotiation, etc. with the newest climate change projection information. Additionally, the atlas will show the historical responsibility of the developed/developing countries and possible contributions to the mitigation of climate change according to their pledge of GHG emission reduction after the Cancun Agreement as an extension numerical experiment to CMIP5 with NCAR’s CESM1.0. The authors will update this atlas after future releases of CMIP5 model outputs and update the figures in the second edition of the atlas in 2012-2013.