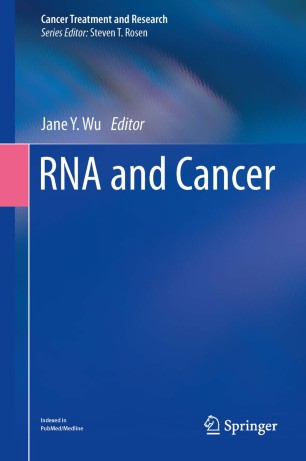 In the last decade, it has become increasingly clear that RNA is not simply a messenger molecule directing protein synthesis. Rather, it has multiple, versatile functional roles in cells, especially in mammalian gene regulation, and thereby influences almost every aspect of cellular life.

This book reviews recent progress in selected areas of RNA processing in which information of particular relevance to cancer development and therapy has been obtained. It opens by examining the coupling between transcription and splicing. Three subsequent chapters describe in detail cancer-associated aberrant RNAs, new methodology for their detection, and the functional impact on expression of important genes, including oncogenes and tumor suppressor genes. Further topics include the role of microRNAs in cancer and the possible involvement of the perinucleolar compartment. The implications for cancer of regulation of mRNA stability by cellular signaling are discussed, and the importance of splicing defects in the regulation of cell death genes is examined. The potential for the development of oligonucleotide therapeutics is then reviewed before the final chapter considers clinical perspectives on the study of RNA defects in cancer.

All chapters have been written by internationally renowned experts. The book is intended for all with an interest in gene regulation and cancer biology, and especially for those not directly working on RNA biology, including clinicians and medical students. It is hoped that it will stimulate further innovative research collaborations between RNA biologists and cancer researchers, leading to improved cancer diagnosis and treatment.