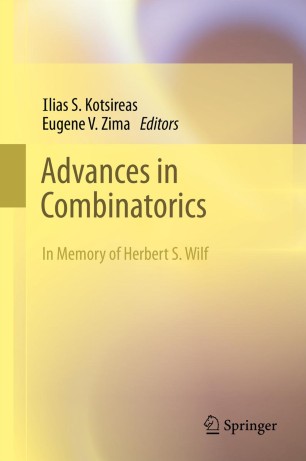 This volume, as Andrew M. Odlzyko writes in the foreword, “commemorates and celebrates the life and achievements of an extraordinary person.” Originally conceived as an 80th birthday tribute to Herbert Wilf, the well-known combinatorialist, the book has evolved beyond the proceeds of the W80 tribute.

Professor Wilf was an award-winning teacher, who was supportive of women mathematicians, and who had an unusually high proportion of women among his PhD candidates. He was Editor-in-chief of the American Mathematical Monthly and a founder of both the Journal of Algorithms and of the Electronic Journal of Combinatorics. But he was first a researcher, driven by his desire to know and explain the inner workings of the mathematical world.

The book collects high-quality, refereed research contributions by some of Professor Wilf’s colleagues, students, and collaborators. Many of the papers presented here were featured in the Third Waterloo Workshop on Computer Algebra (WWCA 2011, W80), held May 26-29, 2011 at Wilfrid Laurier University, Waterloo, Canada. Others were included because of their relationship to his important work in combinatorics. All are presented as a tribute to Herb Wilf’s contributions to mathematics and mathematical life.