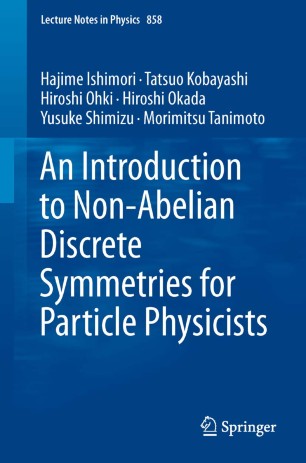 An Introduction to Non-Abelian Discrete Symmetries for Particle Physicists

Indeed, non-Abelian discrete symmetries are considered to be the most attractive choice for the flavor sector: model builders have tried to derive experimental values of quark and lepton masses, and mixing angles by assuming non-Abelian discrete flavor symmetries of quarks and leptons, yet, lepton mixing has already been intensively discussed in this context, as well. The possible origins of the non-Abelian discrete symmetry for flavors is another topic of interest, as they can arise from an underlying theory - e.g. the string theory or compactification via orbifolding – thereby providing a possible bridge between the underlying theory and the corresponding low-energy sector of particle physics.

This text explicitly introduces and studies the group-theoretical aspects of many concrete groups and shows how to derive conjugacy classes, characters, representations, and tensor products for these groups (with a finite number) when algebraic relations are given, thereby enabling readers to apply this to other groups of interest.