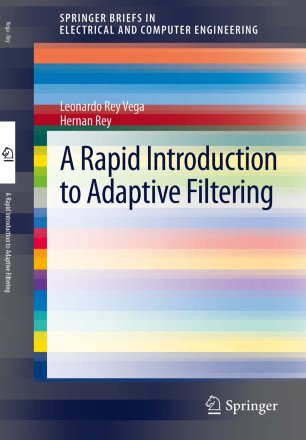 A Rapid Introduction to Adaptive Filtering

In this book, the authors provide insights into the basics of adaptive filtering, which are particularly useful for students taking their first steps into this field. They start by studying the problem of minimum mean-square-error filtering, i.e., Wiener filtering. Then, they analyze iterative methods for solving the optimization problem, e.g., the Method of Steepest Descent. By proposing stochastic approximations, several basic adaptive algorithms are derived, including Least Mean Squares (LMS), Normalized Least Mean Squares (NLMS) and Sign-error algorithms. The authors provide a general framework to study the stability and steady-state performance of these algorithms. The affine Projection Algorithm (APA) which provides faster convergence at the expense of computational complexity (although fast implementations can be used) is also presented. In addition, the Least Squares (LS) method and its recursive version (RLS), including fast implementations are discussed. The book closes with the discussion of several topics of interest in the adaptive filtering field.