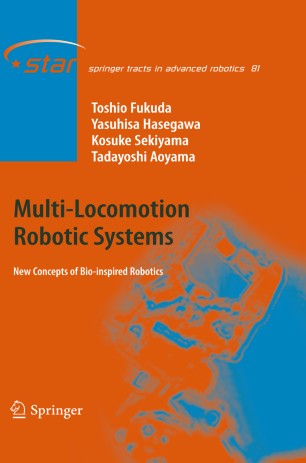 Nowadays, multiple attention have been paid on a robot working in the human living environment, such as in the field of medical, welfare, entertainment and so on. Various types of researches are being conducted actively in a variety of fields such as artificial intelligence, cognitive engineering, sensor- technology, interfaces and motion control. In the future, it is expected to realize super high functional human-like robot by integrating technologies in various fields
including these types of researches.
The book represents new developments and advances in the field of bio-inspired robotics research introducing the state of the art, the idea of multi-locomotion robotic system to implement the diversity of animal motion. It covers theoretical and computational aspects of Passive Dynamic Autonomous Control (PDAC), robot motion control, multi legged walking and climbing as well as brachiation focusing concrete robot systems, components and applications. In addition, gorilla type robot systems are described as hardware of Multi-Locomotion Robotic system. It is useful for students and researchers in the field of robotics in general, bio-inspired robots, multi-modal locomotion, legged walking, motion control, and humanoid robots. Furthermore, it is also of interest for lecturers and engineers in practice building systems cooperating with humans.