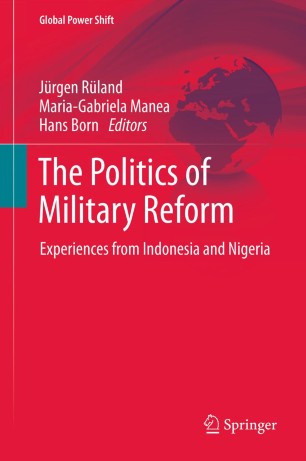 The Politics of Military Reform

Experiences from Indonesia and Nigeria

This volume seeks to explain why democratization and military reforms stagnate in newly democratizing countries. The contributions blend historical, ideational, cultural and structural explanatory factors to analyze the trajectories of military reform in Indonesia and Nigeria, two major regional powers that share many structural commonalities. In the tradition of the literature on security sector reform (SSR), the book not only scrutinizes executive initiatives toward military reform, but also provides ample coverage of societal actors. Findings show that while military reform is stagnating in both countries, societal forces ought to be taken into account more as major driving forces in explaining military reform. Several chapters study how legislatures, non-governmental organizations and the civilian defence epistemic community contribute to the transformation of military institutions. The last part of the book tackles another aspect rarely studied in the literature on military reform, namely, the role of militias in military reform.