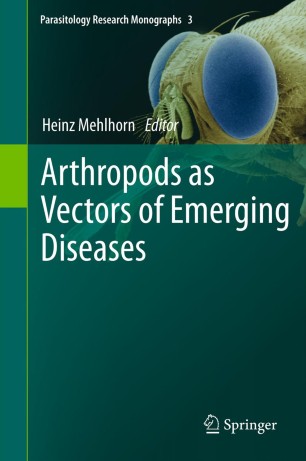 Arthropods as Vectors of Emerging Diseases

Without a doubt the recently accelerating globalization supports the import of agents of disease into countries where they never had been or where they had long since been eradicated, leading to a false sense of living on a “safe island.” These newly imported or reintroduced diseases – called “emerging diseases” – may lead to severe outbreaks in cases where the countries are not prepared to combat them, or in cases where viruses are introduced that cannot be controlled by medications or vaccines.

Arthropods are well known vectors for the spread of diseases. Thus their invasion from foreign countries and their spreading close to human dwellings must be blocked everywhere (in donor and receptor countries) using safe and effective measures.

This book presents reviews on examples of such arthropod-borne emerging diseases that lurk on the fringes of our crowded megacities. The following topics show that there is an ongoing invasion of potential vectors and that control measures must be used now in order to avoid disastrous outbreaks of mass diseases.