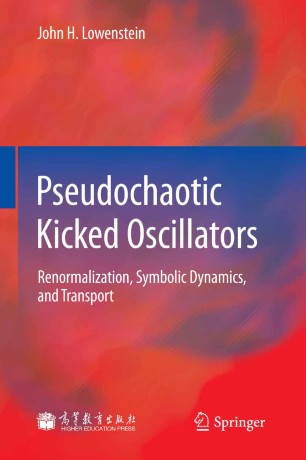 "Pseudochaotic Kicked Oscillators: Renormalization, Symbolic Dynamics, and Transport" presents recent developments in pseudochaos, which is concerned with complex branching behaviors of dynamical systems at the interface between orderly and chaotic motion. Pseudochaos is characterized by the trapping of orbits in the vicinity of self-similar hierarchies of islands of stability, producing phase-space displacements which increase asymptotically as a power of time. This monograph is a thorough, self-contained investigation of a simple one-dimensional model (a kicked harmonic oscillator) which exhibits pseudochaos in its purest form. It is intended for graduate students and researchers in physics and applied mathematics, as well as specialists in nonlinear dynamics.

Dr. John H. Lowenstein is a Professor Emeritus in the Department of Physics at New York University, USA.