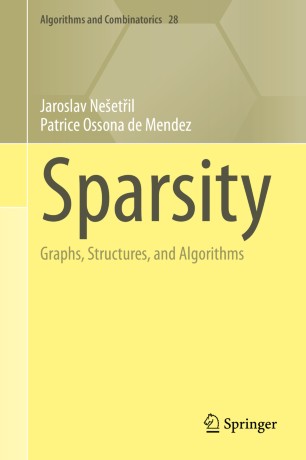 Part of the Algorithms and Combinatorics book series (AC, volume 28)

This is the first book devoted to the systematic study of sparse graphs and sparse finite structures. Although the notion of sparsity appears in various contexts and is a typical example of a hard to define notion, the authors devised an unifying classification of general classes of structures. This approach is very robust and it has many remarkable properties. For example the classification is expressible in many different ways involving most extremal combinatorial invariants.

This study of sparse structures found applications in such diverse areas as algorithmic graph theory, complexity of algorithms, property testing, descriptive complexity and mathematical logic (homomorphism preservation,fixed parameter tractability and constraint satisfaction problems). It should be stressed that despite of its generality this approach leads to linear (and nearly linear) algorithms.

This book is related to the material presented by the first author at  ICM 2010.