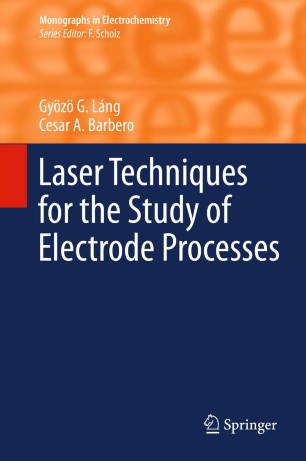 Laser Techniques for the Study of Electrode Processes

Part of the Monographs in Electrochemistry book series (MOEC)

Laser-enabled measurements are valuable tools for the investigation of surfaces and interfaces or for the in situ investigation of interfacial processes including electrode processes. The understanding of the thermodynamics of solid/liquid surfaces is important for surface science and electrochemistry. In the first part of this book, the authors describe a range of techniques for investigating interfacial tension and surface stress, which is important for coatings, thin films, and fuel cells. The techniques covered comprise bending beam (bending plate, bending cantilever, wafer curvature) methods with different detection techniques. Special attention is given to methods using optical detection by laser beam deflection or interferometry. The second part is devoted to the techniques based on the detection of refractive index gradients in the solution. The refractive index changes could be related to concentration gradients (Probe Beam Deflection, PBD) or light-induced thermal gradients (Photothermal Deflection Spectroscopy, PDS). The application of the techniques to surface-confined and solution electrochemical systems is described. Subsequently, a comparison with others techniques able to monitor ion fluxes is performed.

Gyözö G. Láng is Professor at the Eötvös Loránd University in Budapest, Hungary, President of the Electrochemical Committee of the Hungarian Academy of Sciences, he has been Regional Representative for Hungary of the International Society of Electrochemistry 2005-2010. He is a member of the Editorial Board of the Journal of Electrochemical Science and Engineering.

Cesar A. Barbero is presently full professor and head of the Advanced Materials Program at UNRC. He is a permanent research fellow of the Argentinian Research National Council (CONICET) since 1995. Barbero received the Tajima Prize of the International Society of Electrochemistry (ISE) in 1996, the Rafael Labriola Prize of the Argentinian Chemistry Society (AQA) in 2004 and the Maria Cristina Giordano Prize of the Argentinian Society for Physical Chemistry Research (AAIFQ) in 2007. He is an IUPAC Fellow since 2000. In 2007 he received the John Simon Guggenheim Fellowship (USA). He has been invited professor at the universities of Paris VII (France), Alicante (Spain), La Laguna (Spain), Wales at Bangor (UK) and Buenos Aires (Argentina).

“This is a well-written book, excelling in the rigor of presentation and in detailed reference lists at the end of each chapter, for the convenience and extended study of each subject discussed. … this book is of very high scientific value, which can be used by people doing research in this field. … the book can be highly recommended.” (E. Gileadi, Journal of Solid State Electrochemistry, Vol. 17, 2013)
Buy options