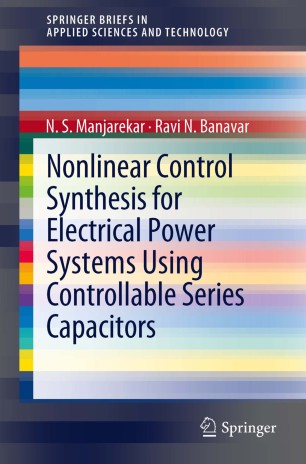 To start with, the CSC is modeled by the injection model which is
based on the assumption that the CSC dynamics is very fast as compared to the dynamics of the power system and hence can be approximated by an algebraic equation. Here, by neglecting the CSC dynamics, the input vector $g(x)$ in the open loop system takes a
complex form - the injection model. Using this model, interconnection and damping assignment passivity-based control (IDA-PBC)
methodology is demonstrated on two power systems: a single machine infinite bus (SMIB) system and a two machine system.
Further, IDA-PBC is used to derive stabilizing controllers for power systems, where the CSC dynamics are included as a first order system.

Next, we consider a different control methodology, immersion and invariance (I\&I), to synthesize an asymptotically stabilizing control law for the SMIB system with a CSC. The CSC is described by a first order system. As a generalization of I\&I, we incorporate the power balance algebraic constraints in the load bus to the
SMIB swing equation, and extend the design philosophy to a
class of differential algebraic systems. The proposed result is then demonstrated on another example: a two-machine
system with two load buses and a CSC. The controller performances are validated through simulations for all cases.