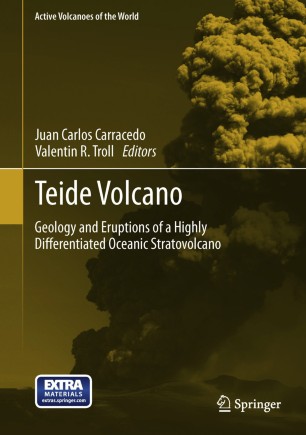 Geology and Eruptions of a Highly Differentiated Oceanic Stratovolcano

Part of the Active Volcanoes of the World book series (AVOLCAN)

Teide Volcano has many different meanings: For the Guanche aborigines, who endured several of its eruptions, it was Echeide (Hell). Early navigators had in Teide, a lifesaving widely visible landmark that was towering over the clouds. For the first explorers, Teide was a challenging and dangerous climb, since it was thought that Teide's peak was so high that from its summit the sun was too close and far too hot to survive. Teide was considered the highest mountain in the world at that time and measuring its height precisely was a great undertaking and at the time of global scientific significance. For von Buch, von Humboldt, Lyell and other great 18th and19th century naturalists, Teide helped to shape a new and now increasingly 'volcanic' picture, where the origin of volcanic rocks (from solidified magma) slowly casted aside Neptunism and removed some of the last barriers for the development of modern Geology and Volcanology as the sciences we know today. For the present day population of Tenerife, living on top of the world's third tallest volcanic structure on the planet, Teide has actually become "Padre Teide", a fatherly protector and an emblematic icon of Tenerife, not to say of the Canaries as a whole. The UNESCO acknowledged this iconic and complex volcano, as "of global importance in providing evidence of the geological processes that underpin the evolution of oceanic islands". Today, 'Teide National Park' boasts 4 Million annual visitors including many 'volcano spotters' and is a spectacular natural environment which most keep as an impression to treasure and to never forget. For us, the editors of this book, Teide is all of the above; a 'hell of a job', a navigation point on cloudy days, a challenge beyond imagination, a breakthrough in our understanding of oceanic volcanism that has shaped our way of thinking about volcanoes, and lastly, Teide provides us with a reference point from where to start exploring other oceanic volcanoes in the Canaries and beyond. Here we have compiled the different aspects and the current understanding of this natural wonder.