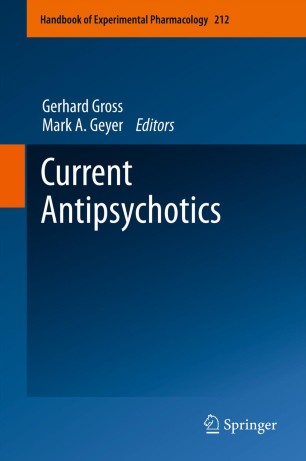 Six decades after the serendipitous discovery of chlorpromazine as an antipsychotic and four decades after the launch of clozapine, the first atypical or second generation antipsychotic, psychopharmacology has arrived at an important crossroad. It is clear that pharmacological research and pharmaceutical development must now focus on complementary or even alternative mechanisms of action to address unmet medical  needs, i.e. poorly treated domains of schizophrenia, improved acceptance by patients, better adherence to medication, safety in psychoses in demented patients, and avoiding cardiac and metabolic adverse effects. The first completely novel mechanisms evolving from our insights into the pathophysiology of psychotic disorders, especially the role of glutamatergic mechanisms in schizophrenia, are now under development, and further principles are on the horizon. This situation, in many respects similar to that when the initial second-generation antipsychotics became available, can be rewarding for all.  Preclinical and clinical researchers now have the opportunity to confirm their hypotheses and the pharmaceutical industry may be able to develop really novel classes of therapeutics.

When we were approached by the publishers of the Handbook of Experimental Pharmacology to prepare a new volume on antipsychotics, our intention was to capture both, the accumulated preclinical and clinical knowledge about current antipsychotics as well as prospects for new and potentially more specific antischizophrenia principles. These efforts should be based on the pathophysiology of the diseases and the affected neurotransmitter systems. Since preclinical research on antipsychotic compounds is only reliable when intimately linked through translational aspects to clinical results, we decided to include clinical science as well. It turned out that that this endeavor could not be covered by a single volume. We thank the editorial board and the publishers for supporting our decision to prepare two volumes: Current Antipsychotics and Novel Antischizophrenia Treatments. These topics cannot really be separated from one another and should be seen as a composite entity despite the somewhat arbitrary separation of contributions into two volumes. The continuing challenges of developing improved and safer antipsychotic medications remain of concern and are discussed in the first volume. The new opportunities for the field to develop and license adjunctive treatments for the negative symptoms and cognitive deficits that are treated inadequately by existing compounds have been incentivized recently and provide the focus for the second volume. We hope these collective contributions will facilitate the development of improved treatments for the full range of symptomatology seen in the group of schizophrenias and other major psychotic disorders.

This volume will try to put current therapy - achievements, shortcomings, remaining medical needs - and emerging new targets into the context of increasing knowledge regarding the genetic and neurodevelopmental contributions to the pathophysiology of schizophrenia. Some of the chapters will also deal with respective experimental and clinical methodology, biomarkers, and translational aspects of drug development. Non-schizophrenia indications will be covered to some extent, but not exhaustively.