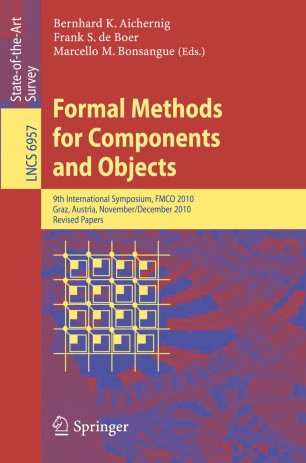 FMCO: International Symposium on Formal Methods for Components and Objects

Formal Methods for Components and Objects

The focus in development methodologies of large and complex software systems has switched in the last two decades from functional issues to structural issues; this holds for both the object-oriented and the more recent component-based software engineering paradigms. Formal methods have been applied successfully to the verification of medium-sized programs in protocol and hardware design for quite a long time. However, their application to the development of large systems requires more emphasis on specification, modeling and validation techniques supporting the concepts of reusability and modifiability, and their implementation in new extensions of existing programming languages like Java. This state-of-the-art survey presents the outcome of the 9th Symposium on Formal Methods for Components and Objects, held in Graz, Austria, in November/December 2010. The volume contains 20 revised contributions submitted after the symposium by speakers from each of the following European IST projects: the FP7-IST project AVANTSSAR on automated validation of trust and security of service-oriented architectures; the FP7-IST project DEPLOY on industrial deployment of advanced system engineering methods for high productivity and dependability; the ESF-COST Action IC0701 on formal verification of object-oriented software; the FP7-IST project HATS on highly adaptable and trustworthy software using formal models; the FP7-SST project INESS on an integrated European railway signalling system; the FP7-IST project MADES on a model-driven approach to improve the current practice in the development of embedded systems; the FP7-IST project MOGENTES on model-based generation of tests for dependable embedded systems; as well as the FP7-IST project MULTIFORM on integrated multi-formalism tool support for the design of networked embedded control systems.