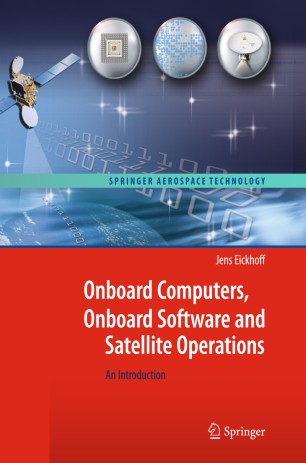 Onboard Computers, Onboard Software and Satellite Operations

This book is intended as a system engineer's compendium, explaining the dependencies and technical interactions between the onboard computer hardware, the onboard software and the spacecraft operations from ground. After a brief introduction on the subsequent development in all three fields over the spacecraft engineering phases each of the main topis is treated in depth in a separate part.

The features of today’s onboard computers are explained at hand of their historic evolution over the decades from the early days of spaceflight up to today. Latest system-on-chip processor architectures are treated as well as all onboard computer major components.

After the onboard computer hardware the corresponding software is treated in a separate part. Both the software static architecture as well as the dynamic architecture are covered, and development technologies as well as software verification approaches are included.

Following these two parts on the onboard architecture, the last part covers the concepts of spacecraft operations from ground. This includes the nominal operations concepts, the redundancy concept and the topic of failure detection, isolation and recovery.

The baseline examples in the book are taken from the domain of satellites and deep space probes. The principles and many cited standards on spacecraft commanding, hardware and software however also apply to other space applications like launchers. The book is equally applicable for students as well for system engineers in space industry.