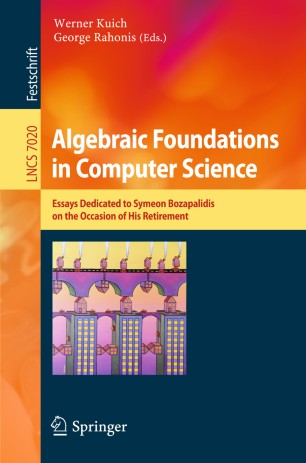 Essays Dedicated to Symeon Bozapalidis on the Occasion of His Retirement

This Festschrift volume is published in honor of Symeon Bozapalidis on the occasion of his retirement after more than 35 years of teaching. The topics covered are: weighted automata over words and trees, tree transducers, quantum automata, graphs, pictures and varieties of semigroups.

Since 1982 -- at the Aristotle University of Thessaloniki -- Symeon's main interests have been closely connected with the algebraic foundations in computer science. In particular, he contributed to the development of the theory of tree languages and series, the axiomatization of graphs, picture theory, and fuzzy languages.

The volume, which focuses on the research interests of Symeon, contains 15 thoroughly refereed invited papers, written by his colleagues, friends, and students. Most of the papers were presented at the Workshop on Algebraic Foundations in Computer Science, held in Thessaloniki, Greece, during November 7--8, 2011.