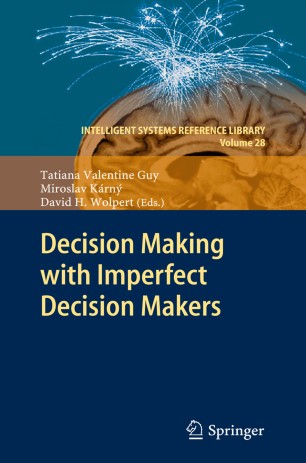 Prescriptive Bayesian decision making has reached a high level of maturity and is well-supported algorithmically. However, experimental data shows that real decision makers choose such Bayes-optimal decisions surprisingly infrequently, often making decisions that are badly sub-optimal. So prevalent is such imperfect decision-making that it should be accepted as an inherent feature of real decision makers living within interacting societies.

To date such societies have been investigated from an economic and gametheoretic perspective, and even to a degree from a physics perspective. However, little research has been done from the perspective of computer science and associated disciplines like machine learning, information theory and neuroscience. This book is a major contribution to such research.

Some of the particular topics addressed include:

• Does the answer change for a system of imperfect decision makers?

• Can we extend existing prescriptive theories for perfect decision makers to make them useful for imperfect ones?

• How can we exploit the relation of these problems to the control under varying and uncertain resources constraints as well as to the problem of the computational decision making?

• What can we learn from natural, engineered, and social systems to help us address these issues?