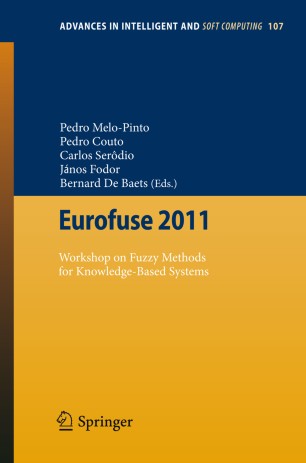 Part of the Advances in Intelligent and Soft Computing book series (AINSC, volume 107)

This carefully edited book comprises the papers from EUROFUSE 2011 Workshop on Fuzzy Methods for Knowledge-based Systems. EUROFUSE was established in 1998 as the EURO (the Association of European Operational Research Societies) Working Group on Fuzzy Sets, as a successor of the former European Chapter of IFSA (the International Fuzzy Systems Association). The present EUROFUSE 2011 workshop is held at Régua, Portugal, 21-23 September, in the World Heritage Site of the Douro Wine Region and is organised by Pedro Melo-Pinto and Pedro Couto. The workshop is devoted to Fuzzy Methods for Knowledge-based Systems. And has the goal to bring together researchers and practitioners developing and applying fuzzy techniques in preference modelling and decision making in an informal atmosphere.

EUROFUSE 2011 has three distinguished invited speakers: Francisco Herrera (Granada, Spain), Radko Mesiar (Bratislava, Slovakia) and Jose Luis Garcia Lapresta (Valladolid, Spain). Next to the invited speakers, the three day program consists of 37 lectures. In total, there are 70 participants from 10 countries. This edited volume contains the final revised manuscripts on the basis of which the program was put together.