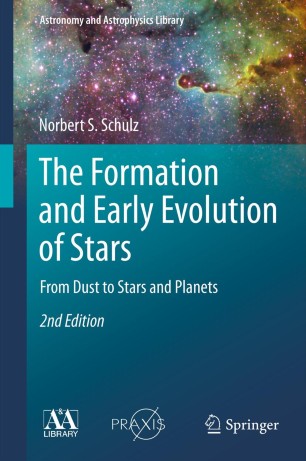 The Formation and Early Evolution of Stars

From Dust to Stars and Planets

Starburst regions in nearby and distant galaxies have a profound impact on our understanding of the early universe. This new, substantially updated and extended edition of Norbert Schulz’s unique book "From Dust to Stars" describes complex physical processes involved in the creation and early evolution of stars. It illustrates how these processes reveal themselves from radio wavelengths to high energy X-rays and gamma–rays, with special reference towards high energy signatures. Several sections devoted to key analysis techniques demonstrate how modern research in this field is pursued and new chapters are introduced on massive star formation, proto-planetary disks and observations of young exoplanets. Recent advances and contemporary research on the theory of star formation are explained, as are new observations, specifically from the three great observatories of the Spitzer Space Telescope, the Hubble Space Telescope and the Chandra X-Ray Observatory which all now operate at the same time and make high resolution space based observing in its prime. As indicated by the new title two new chapters have been included on proto-planetary disks and young exoplanets. Many more colour images illustrate attractive old and new topics that have evolved in recent years. The author gives updates in theory, fragmentation, dust, and circumstellar disks and emphasizes and strengthens the targeting of graduate students and young researchers, focusing more on computational approaches in this edition.