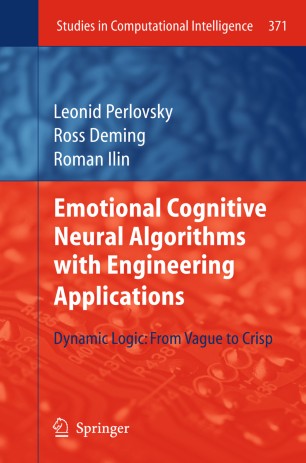 Dynamic logic (DL) recently had a highest impact on the development in several areas of modeling and algorithm design. The book discusses classical algorithms used for 30 to 50 years (where improvements are often measured by signal-to-clutter ratio), and also new areas, which did not previously exist. These achievements were recognized by National and International awards. Emerging areas include cognitive, emotional, intelligent systems, data mining, modeling of the mind, higher cognitive functions, evolution of languages and other. Classical areas include detection, recognition, tracking, fusion, prediction, inverse scattering, and financial prediction. All these classical areas are extended to using mixture models, which previously was considered unsolvable in most cases. Recent neuroimaging experiments proved that the brain-mind actually uses DL. „Emotional Cognitive Neural Algorithms with Engineering Applications“ is written for professional scientists and engineers developing computer and information systems, for professors teaching modeling and algorithms, and for students working on Masters and Ph.D. degrees in these areas. The book will be of interest to psychologists and neuroscientists interested in mathematical models of the brain and min das well.