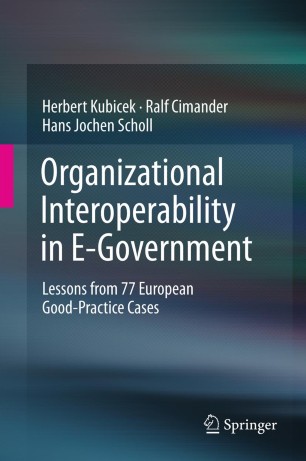 In the e-government research community as well as in many national e-government programs, interoperability is widely seen as a key factor in developing effective and attractive e-services. There is also agreement that interoperability encompasses not only mere technical standards and interfaces, but also includes organizational, legal, and cultural aspects. Several interoperability frameworks have been introduced on national and international levels, and recommendations have been made for the adaptation of enterprise architectures in the public sector.

Common to all these approaches is their top-down deductive procedure, which does not connect very well to the real world of e-government projects. In contrast, in this volume, which is based on empirical research, the authors introduce a bottom-up inductive approach to deal with the challenges of interoperability-related governance. Based on so-called “good-practice” cases of interoperability in e-government, they derive concepts and classifications that help to uncover and assess similarities and differences between the cases. As a result, they present an empirically based conceptual framework that details the options for IT governance of interoperability in government. In addition, their findings also make it possible to critically assess and improve other existing frameworks.

With this work, which combines different thematic foci as well as a European and a US background the authors situate empirical results in the broader context of theoretical and political reflection. Thus they provide insights into strategic choices for CIOs in e-government at a national or regional level, experiences and lessons learned for managers and developers in e-government projects, and a huge set of empirical data for administrative and political scientists.

Dr. Herbert Kubicek is a Professor of Applied Computer Science, in particular Telecommunications and Information Management, at the University of Bremen, Germany, and Scientific Director of the Institute for Information Management Bremen (ifib). He has a background in business administration and social science, and his research deals with inter-organizational information systems since the 1990s.

Ralf Cimander is a Senior Researcher at the Institute for Information Management Bremen (ifib). He was involved in the identification, analysis and description of good practice cases in the European Commissions’ Study on Back-office Reorganization and the MODINIS Study on Interoperability in E-Government at the Local and Regional Level, as well as a European Commission transfer project concerned with interoperability in public procurement. His current research focuses on the comparative assessment of e-participation in the context of sustainable development and climate change.

Dr. Hans J. Scholl is an Associate Professor with tenure in the Information School at the University of Washington, Seattle, WA, USA. His special interests include open government, interoperability, emergency and disaster response management, and strategic choices in mobile technology diffusion in digital government. He is President of the Digital Government Society and also the vice chair of the IFIP TC 8.5 Working Group (Information Systems and Public Administration). In addition, he chairs the renowned Electronic Government Track at the Hawaii International Conference on System Sciences (HICSS) and co-organizes the premier European conference on e-Government (IFIP EGOV).