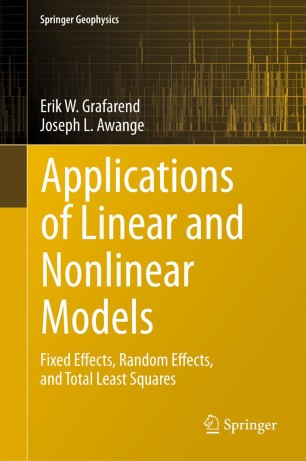 Here we present a nearly complete treatment of the Grand Universe of linear and weakly nonlinear regression models within the first 8 chapters. Our point of view is both an algebraic view as well as a stochastic one. For example, there is an equivalent lemma between a best, linear uniformly unbiased estimation (BLUUE) in a Gauss-Markov model and a least squares solution (LESS) in a system of linear equations. While BLUUE is a stochastic regression model, LESS is an algebraic solution. In the first six chapters we concentrate on underdetermined and overdeterimined linear systems as well as systems with a datum defect. We review estimators/algebraic solutions of type MINOLESS, BLIMBE, BLUMBE, BLUUE, BIQUE, BLE, BIQUE and Total Least Squares. The highlight is the simultaneous determination of the first moment and the second central moment of a probability distribution in an inhomogeneous multilinear estimation by the so called E-D correspondence as well as its Bayes design. In addition, we discuss continuous networks versus discrete networks, use of Grassmann-Pluecker coordinates, criterion matrices of type Taylor-Karman as well as FUZZY sets. Chapter seven is a speciality in the treatment of an overdetermined system of nonlinear equations on curved manifolds. The von Mises-Fisher distribution is characteristic for circular or (hyper) spherical data. Our last chapter eight is devoted to probabilistic regression, the special Gauss-Markov model with random effects leading to estimators of type BLIP and VIP including Bayesian estimation.

The fifth problem of algebraic regression, the system of conditional equations of homogeneous and inhomogeneous type, is formulated. An analogue is the inhomogeneous general linear Gauss-Markov model with fixed and random effects, also called mixed model. Collocation is an example. Another speciality is our sixth problem of probabilistic regression, the model "errors-in-variable”, also called Total Least Squares, namely SIMEX and SYMEX developed by Carroll-Cook-Stefanski-Polzehl-Zwanzig. Another speciality is the treatment of the three-dimensional datum transformation and its relation to the Procrustes Algorithm. The sixth problem of generalized algebraic regression is the system of conditional equations with unknowns, also called Gauss-Helmert model. A new method of an algebraic solution technique, the concept of Groebner Basis and Multipolynomial Resultant is finally presented, illustrating polynomial nonlinear equations.

A great part of the work is presented in four Appendices. Appendix A is a treatment, of tensor algebra, namely linear algebra, matrix algebra and multilinear algebra. Appendix B is devoted to sampling distributions and their use in terms of confidence intervals and confidence regions. Appendix C reviews the elementary notions of statistics, namely random events and stochastic processes. Appendix D introduces the basics of Groebner basis algebra, its careful definition, the Buchberger Algorithm, especially the C. F. Gauss combinatorial algorithm.

Throughout we give numerous examples and present various test computations. Our reference list includes more than 3000 references, books and papers attached in a CD.

This book is a source of knowledge and inspiration not only for geodesists and mathematicians, but also for engineers in general, as well as natural scientists and economists. Inference on effects which result in observations via linear and nonlinear functions is a general task in science. The authors provide a comprehensive in-depth treatise on the analysis and solution of such problems. I wish all readers of this brilliant encyclopaedic book this pleasure and much benefit.