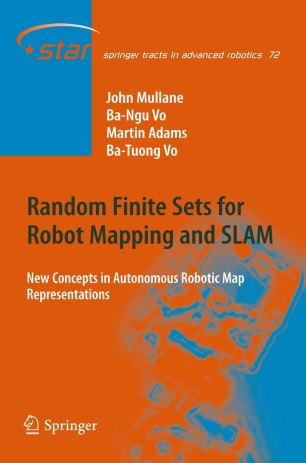 Simultaneous Localisation and Map (SLAM) building algorithms, which rely on random vectors to represent sensor measurements and feature maps are known to be extremely fragile in the presence of feature detection and data association uncertainty. Therefore new concepts for autonomous map representations are given in this book, based on random finite sets (RFSs). It will be shown that the RFS representation eliminates the necessity of fragile data association and map management routines. It fundamentally differs from vector based approaches since it estimates not only the spatial states of features but also the number of map features which have passed through the field(s) of view of a robot's sensor(s), an attribute which is necessary for SLAM.

The book also demonstrates that in SLAM, a valid measure of map estimation error is critical. It will be shown that under an RFS-SLAM representation, a consistent metric, which gauges both feature number as well as spatial errors, can be defined.

The concepts of RFS map representations are accompanied with autonomous SLAM experiments in urban and marine environments. Comparisons of RFS-SLAM with state of the art vector based methods are given, along with pseudo-code implementations of all the RFS techniques presented.

Ba-Tuong Vo is Assistant Professor, UWA. He received his B.Sc, B.E and Ph.D. degrees from UWA.