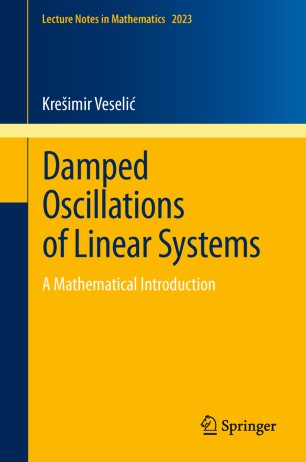 The theory of linear damped oscillations was originally developed more than hundred years ago and is still of vital research interest to engineers, mathematicians and physicists alike. This theory plays a central role in explaining the stability of mechanical structures in civil engineering, but it also has applications in other fields such as electrical network systems and quantum mechanics.
This volume gives an introduction to linear finite dimensional damped systems as they are viewed by an applied mathematician. After a short overview of the physical principles leading to the linear system model, a largely self-contained mathematical theory for this model is presented. This includes the geometry of the underlying indefinite metric space, spectral theory of J-symmetric matrices and the associated quadratic eigenvalue problem. Particular attention is paid to the sensitivity issues which influence numerical computations. Finally, several recent research developments are included, e.g. Lyapunov stability and the perturbation of the time evolution.