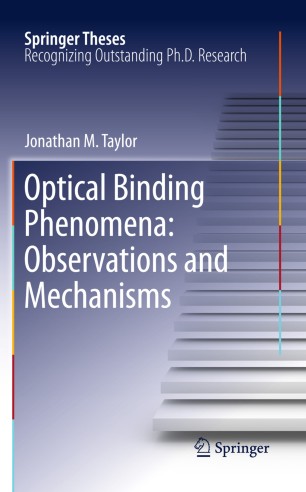 This thesis addresses optical binding - a new area of interest within the field of optical micromanipulation. It presents, for the first time, a rigorous numerical simulation of some of the key results, along with new experimental findings and also physical interpretations of the results. In an optical trap particles are attracted close to areas of high optical intensities and intensity gradients. So, for example, if two lasers are pointed towards each other (a counter propagating trap) then a single particle is trapped in the centre of the two beams – the system is analogous to a particle being held by two springs in a potential well. If one increases the number of particles in the trap then naively one would expect all the particles to collect in the centre of the well. However, the effect of optical binding means that the presence of one particle affects the distribution of light experienced by another particle, resulting in extremely complex interactions that can lead to unusual 1D and 2D structures to form within the trap. Optical binding is not only of theoretical interest but also has applications in micromanipulation and assembly.