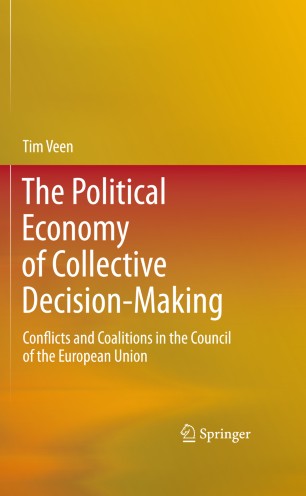 The Political Economy of Collective Decision-Making

Conflicts and Coalitions in the Council of the European Union

The Council of the European Union is the institutional heart of EU policy-making. But ‘who gets what, when and how’ in the Council? What are the dimensions of political conflict, and which countries form coalitions in the intense negotiations to achieve their desired policy outcomes? Focussing on collective decision-making in the Council between 1998 and 2007, this book provides a comprehensive account of these salient issues that lie at the heart of political accountability and legitimacy in the European Union. Based on a novel and unique dataset of estimates of government policy positions, salience and power in influencing deliberations, an explanatory model approximating the Nash-Bargaining solution is employed to predict the policy outcomes on ten policy domains of central importance to this institution. The book's analyses comprise investigations into the determinants of decision-making success, the architecture of the political space and the governments' coalition behavior.

While the study of European Union legislation has made considerable progress in recent years, we know relatively little about the inner workings of the most important actor in these processes, the Council of Ministers. Tim Veen´s timely book breaks new ground in EU studies and shows with admirable rigor and clarity that redistributive conflicts are at the heart of the emerging polity. The main result of this intellectual tour de force is the confirmation of the rock and roll wisdom that states often get what they want, if the sufficiently try to do so. Veen´s findings thus alert us to the underlying forces that hold the European Union together despite the increasing diversity of its members.