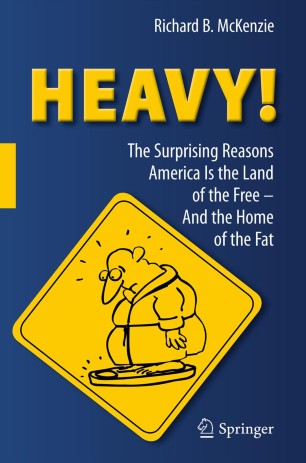 In HEAVY! Professor McKenzie addresses ‘the coming fat (policy) war’ over proposed fat taxes and bans, making the case for heavy people bearing the full burden of their weight-related costs.

America has become the heaviest country in the world. This book lays out the unheralded, mainly economic reasons for the country’s weight gain, which include – believe it or not – the growth in world trade freedom, the downfall of communism, and the rise of women’s liberation. The consequences of this trend are a HEAVY! burden as well, resulting in greater emissions of greenhouse gases, rising health insurance costs and fewer insured Americans, reductions in the wages of heavy people, and requiring reinforced rescue equipment and hospital operating tables.

“If you aren’t interested in the economic, political or health implications of a heavier America, then this book is not for you. But if you want a view on the obesity “crisis” that is informed, balanced and full of surprising causes and consequences for America’s excess tonnage, and suspect that there is more to lose than pounds from turning politicians loose on this problem, then read this book."

"Richard McKenzie provides an entertaining tour of the economic, biological, and social causes and consequences of Americans' eating habits."

"Vividly written and full of insight, HEAVY! powerfully illustrates how the economics of obesity will be shaping our health, wealth, and the coming policy debates around foods, fuels, and freedom of choice."

Richard McKenzie is the Walter B. Gerken Professor of Economics and Management in the Merage School of Business at the University of California, Irvine. He has written over thirty books, several of which have been written for general audiences, including The Home: A Memoir of Growing Up in an Orphanage (Basic Books 1996 and Dickens Press 2006), Getting Rich in America: Eight Simple Rules for Building a Fortune and a Satisfying Life (Harper 1998) and Why Popcorn Costs So Much at the Movies, And Other Pricing Puzzles (Springer 2008). His most recent strictly academic books include Predictably Rational? In Search of Defenses of Rational Behavior in Economics (Springer 2010) and In Defense of Monopoly: How Market Power Fosters creative Production (with Dwight Lee, University of Michigan Press, 2008). He is also co-author of a widely used textbook, Microeconomics for MBAs: The Economic Way of Thinking for Managers. His book with Gordon Tullock, The New World of Economics, which has been used over the years in most of the country’s leading colleges and universities and has been translated into several languages, will be published in a revived sixth edition in 2011. Professor McKenzie has written any number of public policy commentaries carried in national and major regional newspapers, including The Wall Street Journal, The New York Times, The Washington Post, USA Today, and Reader’s Digest. Finally, he has produced a PBS-syndicated documentary Homecoming: The Forgotten World of America’s Orphanages