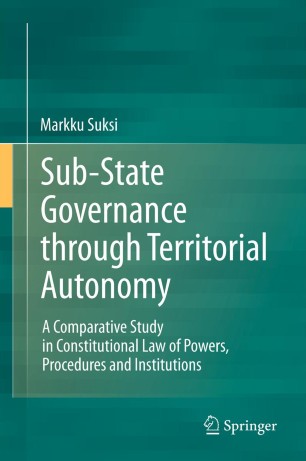 A Comparative Study in Constitutional Law of Powers, Procedures and Institutions

This study focuses on territorial autonomy, which is often used in different conflict-resolution and minority situations. Four typical elements are identified on the basis of the historical example of the Memel Territory and the so-called Memel case of the PCIJ; distribution of powers, participation through elections and referendums, executive power of territorial autonomy, and international relations. These elements are used for a comparative analysis of the constitutional law that regulates the position of six currently existing special jurisdictions, the Åland Islands in Finalnd, Scotland in the United Kingdom, Puerto Rico in the United States of America, Hong Kong in China, Aceh in Indonesia and Zanzibar in Tanzania. The current sub-state entities examined can be arranged in relation to Memel in a manner that indicates that Hong Kong and the Åland conform to the typical territorial autonomy, while Puerto Rico and Aceh should probably not be understood as territorial autonomies proper. At the same time, the territorial autonomies can be distinguished from federally organized sub-state entities.