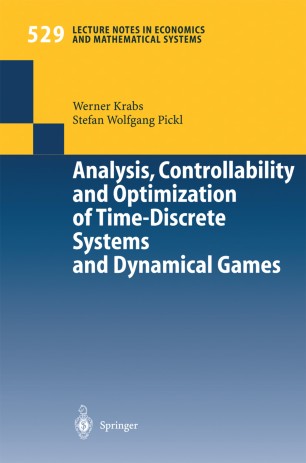 Analysis, Controllability and Optimization of Time-Discrete Systems and Dynamical Games

J. P. La Salle has developed in [20] a stability theory for systems of difference equations (see also [8]) which we introduce in the first chapter within the framework of metric spaces. The stability theory for such systems can also be found in [13] in a slightly modified form. We start with autonomous systems in the first section of chapter 1. After theoretical preparations we examine the localization of limit sets with the aid of Lyapunov Functions. Applying these Lyapunov Functions we can develop a stability theory for autonomous systems. If we linearize a non-linear system at a fixed point we are able to develop a stability theory for fixed points which makes use of the Frechet derivative at the fixed point. The next subsection deals with general linear systems for which we intro­ duce a new concept of stability and asymptotic stability that we adopt from [18]. Applications to various fields illustrate these results. We start with the classical predator-prey-model as being developed and investigated by Volterra which is based on a 2 x 2-system of first order differential equations for the densities of the prey and predator population, respectively. This model has also been investigated in [13] with respect to stability of its equilibrium via a Lyapunov function. Here we consider the discrete version of the model.