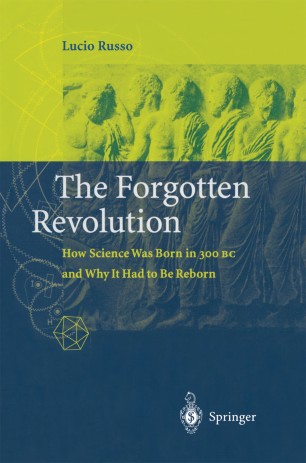 The period from the late fourth to the late second century B. C. witnessed, in Greek-speaking countries, an explosion of objective knowledge about the external world. WhileGreek culture had reached great heights in art, literature and philosophyalreadyin the earlier classical era, it is in the so-called Hellenistic period that we see for the ?rst time — anywhere in the world — the appearance of science as we understand it now: not an accumulation of facts or philosophically based speculations, but an or- nized effort to model nature and apply such models, or scienti?ctheories in a sense we will make precise, to the solution of practical problems and to a growing understanding of nature. We owe this new approach to scientists such as Archimedes, Euclid, Eratosthenes and many others less familiar todaybut no less remarkable. Yet, not long after this golden period, much of this extraordinary dev- opment had been reversed. Rome borrowed what it was capable of from the Greeks and kept it for a little while yet, but created very little science of its own. Europe was soon smothered in theobscurantism and stasis that blocked most avenues of intellectual development for a thousand years — until, as is well known, the rediscovery of ancient culture in its fullness paved the way to the modern age.