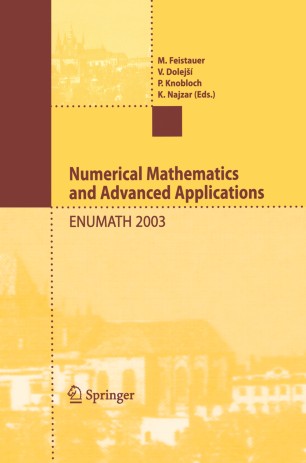 These proceedings collect the major part of the lectures given at ENU­ MATH2003, the European Conference on Numerical Mathematics and Ad­ vanced Applications, held in Prague, Czech Republic, from 18 August to 22 August, 2003. The importance of numerical and computational mathematics and sci­ entific computing is permanently growing. There is an increasing number of different research areas, where numerical simulation is necessary. Let us men­ tion fluid dynamics, continuum mechanics, electromagnetism, phase transi­ tion, cosmology, medicine, economics, finance, etc. The success of applications of numerical methods is conditioned by changing its basic instruments and looking for new appropriate techniques adapted to new problems as well as new computer architectures. The ENUMATH conferences were established in order to provide a fo­ rum for discussion of current topics of numerical mathematics. They seek to convene leading experts and young scientists with special emphasis on con­ tributions from Europe. Recent results and new trends are discussed in the analysis of numerical algorithms as well as in their applications to challenging scientific and industrial problems. The first ENUMATH conference was organized in Paris in 1995, then the series continued by the conferences in Heidelberg 1997, Jyvaskyla 1999 and Ischia Porto 2001. It was a great pleasure and honour for the Czech numerical community that it was decided at Ischia Porto to organize the ENUMATH2003 in Prague. It was the first time when this conference crossed the former Iron Courtain and was organized in a postsocialist country.