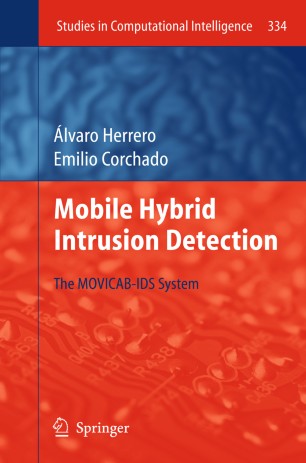 This monograph comprises work on network-based Intrusion Detection (ID) that is grounded in visualisation and hybrid Artificial Intelligence (AI). It has led to the design of MOVICAB-IDS (MObile VIsualisation Connectionist Agent-Based IDS), a novel Intrusion Detection System (IDS), which is comprehensively described in this book.
This novel IDS combines different AI paradigms to visualise network traffic for ID at packet level. It is based on a dynamic Multiagent System (MAS), which integrates an unsupervised neural projection model and the Case-Based Reasoning (CBR) paradigm through the use of deliberative agents that are capable of learning and evolving with the environment.
The proposed novel hybrid IDS provides security personnel with a synthetic, intuitive snapshot of network traffic and protocol interactions. This visualisation interface supports the straightforward detection of anomalous situations and their subsequent identification.
The performance of MOVICAB-IDS was tested through a novel mutation-based testing method in different real domains which entailed several attacks and anomalous situations.