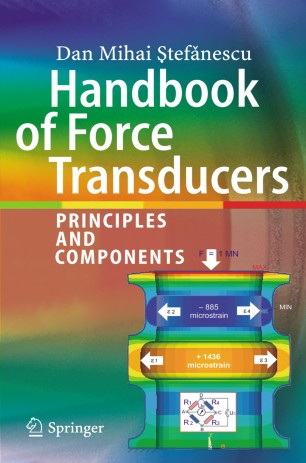 Part II discusses the "(Strain Gauge) Force Transducers Components", evolving from the classical force transducer to the digital / intelligent one, with the incorporation of three subsystems (sensors, electromechanics and informatics). The elastic element (EE) is the "heart" of the force transducer and basically determines its performance. A 12-type elastic element classification is proposed (stretched / compressed column or tube, bending beam, bending and/or torsion shaft, middle bent bar with fixed ends, shear beam, bending ring, yoke or frame, diaphragm, axial-stressed torus, axisymmetrical and voluminous EE), with emphasis on the optimum location of the strain gauges. The main properties of the associated Wheatstone bridge, best suited for the parametrical transducers, are examined, together with the appropriate electronic circuits for SGFTs.

The handbook fills a gap in the field of Force Measurement, both experts and newcomers, no matter of their particular interest, finding a lot of useful and valuable subjects in the area of Force Transducers; in fact, it is the first specialized monograph in this inter- and multidisciplinary field.