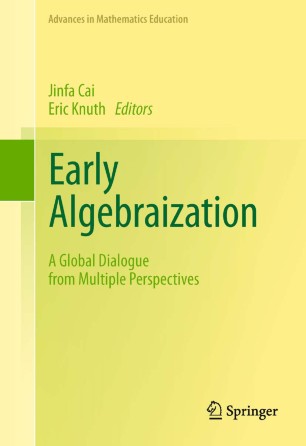 A Global Dialogue from Multiple Perspectives

Part of the Advances in Mathematics Education book series (AME)

In recent years there has been increased interest in the development of students’ algebraic thinking in the elementary and middle school grades. This important and timely new volume contains the most comprehensive collection of research focused on early algebraization. The volume’s authors—leading international mathematics education scholars—present perspectives on early algebraization that promote a global dialogue on the topic. Research is presented from many parts of the world, including Asia, Australasia, Western and Eastern Europe, and North America. The volume authors consider issues concerning early algebraization from three fundamental perspectives—curricular, cognitive, and instructional. The chapters in this volume not only represent the state of the art about research on early algebraization, but also provide suggestions for future research.

“This volume on early algebraization reveals the rich diversity that characterizes the rapidly evolving field of early algebra .… this volume offers to researchers, teachers, curriculum developers, professional development educators, and policy makers alike some of the most recent thinking in the field.” (Carolyn Kieran)