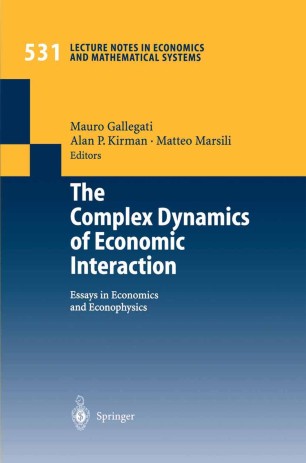 The Complex Dynamics of Economic Interaction

Essays in Economics and Econophysics

This volume contains a selection of contributions presented at the WEHIA02 (Workshop on Economies with Heterogeneous Interacting Agents), which was held at the Abdus Salam International Centre for Physics of Trieste, Italy, on May 29- 31, under the auspices of Exystence, Complex System network of excellence . WEHIA02 is the 7th edition of a workshop, which was held for the first time at the University of Ancona, Italy , on 1996 (1), as a one-week series of seminars for the Italian PhD program . Ancona hosted the event in the years 1997 and 1998 (2) , before it moved to Genoa 1999 (3), Marseille 2000 (4) , Maastricht 2001 (5), and finally to Trieste 2002. The 2003 workshop was held in Kid , Germany, while the next editions will be in Kyoto, Japan (2004) and Essex, UK (2005). The full list of participants, titles of the invited lectures, papers and posters of WEHIA can be found in http ://econ . dea. it/wehia2. The workshop has been always very informal aiming to put together sch- ars of different disciplines working on interaction of heterogeneous "so- thing " (economists, physicists, biologists) . To facilitate participation there has not been conference fee . It aimed to be a locus for communicate and exchange results and experiences . Several collaborations started with the Workshop and it is not without pride that the organizers claim such a result. The WEHIA has had two pars: a pars desiruens and a pars adestruens.