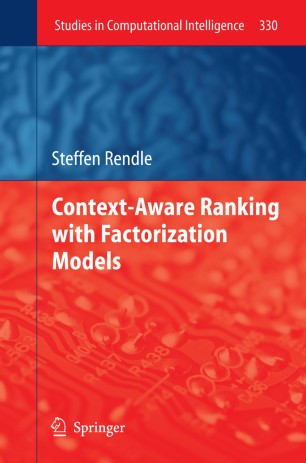 Context-aware ranking is an important task with many applications. E.g. in recommender systems items (products, movies, ...) and for search engines webpages should be ranked. In all these applications, the ranking is not global (i.e. always the same) but depends on the context. Simple examples for context are the user for recommender systems and the query for search engines. More complicated context includes time, last actions, etc. The major problem is that typically the variable domains (e.g. customers, products) are categorical and huge, the observations are very sparse and only positive events are observed. In this book, a generic method for context-aware ranking as well as its application are presented. For modelling a new factorization based on pairwise interactions is proposed and compared to other tensor factorization approaches. For learning, the `Bayesian Context-aware Ranking' framework consisting of an optimization criterion and algorithm is developed. The second main part of the book applies this general theory to the three scenarios of item, tag and sequential-set recommendation. Furthermore extensions of time-variant factors and one-class problems are studied. This book generalizes and builds on work that has received the `WWW 2010 Best Paper Award', the `WSDM 2010 Best Student Paper Award' and the `ECML/PKDD 2009 Best Discovery Challenge Award'.