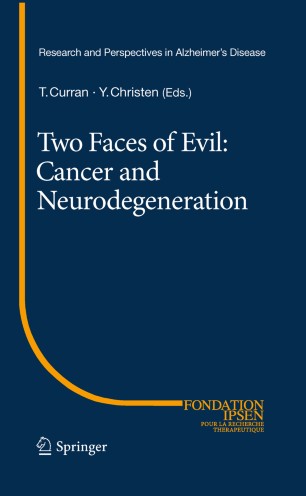 The two greatest medical fears of the aging population are cancer and Alzheimer’s disease. Despite dramatic advances in understanding the molecular etiology of these disorders, therapeutic options for many patients with advanced disease have changed little and outcomes remain dismal. Paradoxically, recent findings suggest that some of the same molecules and biochemical processes underlying cancer may also participate in neurodegeneration. Therefore, it would be very useful to bring together experts from the fields of cancer research and neurodegeneration for discussions of the latest advances and ideas, with a particular emphasis on areas of overlap, to stimulate transdisciplinary interactions with the hope of accelerating progress. Cancer arises as a consequence of a breakdown in the genetic and epigenetic processes governing cell proliferation and cell death. Alterations in several classes of signaling molecules, both oncogenes and tumor suppressor genes, lead to uncontrolled cell growth. Over the past two decades, details of the intricate signaling pathways, from cell surface receptors through protein kinase cascades, transcription factors and modulators of chromatin, as well as the DNA damage response pathways linked to cell cycle control that guard the genome, have been uncovered. In some instances, key regulatory proteins have provided novel targets for development of small molecule inhibitors that are currently being tested in the clinic. The development of the nervous system relies on many of the signaling pathways and growth control processes that go awry in cancer. However, in mature neurons, the very same signaling proteins participate in transduction cascades linking short-term stimuli, elicited by synaptic stimulation, to long-term alterations in neuronal circuits through the regulation of gene expression and chromatin structure. These long-term adaptive modifications lead to changes in synaptic structure and function that contribute to learning and memory. The persistence of growth regulatory molecules in postmitotic neurons provides an opportunity for their contribution to pathophysiological processes resulting in neuronal loss. Recently, evidence has accumulated suggesting an association of cell cycle proteins and signal transduction proteins with neurodegeneration. Indeed, inhibitors of histone deacetylation have shown promise both as anti-cancer agents and in the prevention of neuronal loss

“The authors look at the etiology and molecular pathophysiology of several genes involved in cellular demise and cell proliferation. … The book is going to be of interest to cell biologists primarily and anyone with an interest in cancer or neurodegeneration.” (Joseph J. Grenier, Amazon.com, September, 2013)
Buy options