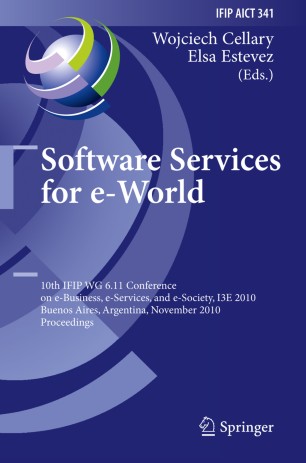 th I3E 2010 marked the 10 anniversary of the IFIP Conference on e-Business, e- Services, and e-Society, continuing a tradition that was invented in 1998 during the International Conference on Trends in Electronic Commerce, TrEC 1998, in Hamburg (Germany). Three years later the inaugural I3E 2001 conference was held in Zurich (Switzerland). Since then I3E has made its journey through the world: 2002 Lisbon (Portugal), 2003 Sao Paulo (Brazil), 2004 Toulouse (France), 2005 Poznan (Poland), 2006 Turku (Finland), 2007 Wuhan (China), 2008 Tokyo (Japan), and 2009 Nancy (France). I3E 2010 took place in Buenos Aires (Argentina) November 3–5, 2010. Known as “The Pearl” of South America, Buenos Aires is a cosmopolitan, colorful, and vibrant city, surprising its visitors with a vast variety of cultural and artistic performances, European architecture, and the passion for tango, coffee places, and football disc- sions. A cultural reference in Latin America, the city hosts 140 museums, 300 theaters, and 27 public libraries including the National Library. It is also the main educational center in Argentina and home of renowned universities including the U- versity of Buenos Aires, created in 1821. Besides location, the timing of I3E 2010 is th also significant––it coincided with the 200 anniversary celebration of the first local government in Argentina.