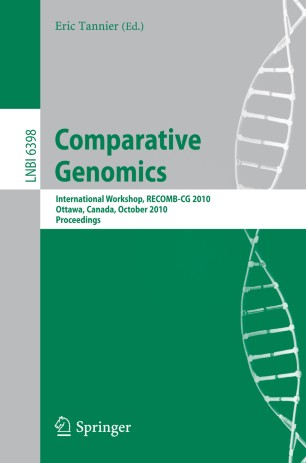 The complexity of genome evolution has given birth to exciting challenges for computational biologists. A various range of algorithmic, statistical, mathem- ical techniques to elucidate the histories of molecules are developed each year and many are presented at the RECOMB satellite workshop on Comparative Genomics. It is a place where scientists working on all aspects of comparative genomics can share ideas on the development of tools and their application to relevant questions. This volume contains the papers presented at RECOMB-CG 2010, held on October 9–11 in Ottawa. The ?eld is still ?ourishing as seen from the papers presented this year: many developments enrich the combinatorics of genome rearrangements, while gene order phylogenies are becoming more and more - curate, thanks to a mixing of combinatorial and statistical principles, associated with rapid and thoughtful heuristics. Several papers tend to re?ne the models of genome evolution, and more and more genomic events can be modeled, from single nucleotide substitutions in whole genome alignments to large structural mutations or horizontal gene transfers.