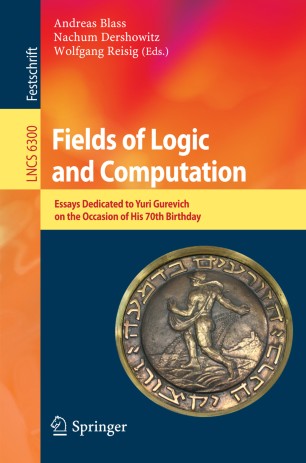 Fields of Logic and Computation

Yuri Gurevich has played a major role in the discovery and development of - plications of mathematical logic to theoretical and practical computer science. His interests have spanned a broad spectrum of subjects, including decision p- cedures, the monadic theory of order, abstract state machines, formal methods, foundations of computer science, security, and much more. In May 2010, Yuri celebrated his 70th birthday. To mark that occasion, on August 22, 2010,a symposium was held in Brno, the Czech Republic, as a sat- lite event of the 35th International Symposium on Mathematical Foundations of Computer Science (MFCS 2010) and of the 19th EACSL Annual Conference on Computer Science Logic (CSL 2010). The meeting received generous support from Microsoft Research. In preparation for this 70th birthday event, we asked Yuri’s colleagues (whether or not they were able to attend the symposium) to contribute to a volume in his honor. This book is the result of that e?ort. The collection of articles herein begins with an academic biography, an annotated list of Yuri’s publications and reports, and a personaltribute by Jan Van den Bussche. These are followed by 28 technical contributions. These articles – though they cover a broad range of topics – represent only a fraction of Yuri’s multiple areas of interest. Each contribution was reviewed by one or two readers. In this regard, the editors wish to thank several anonymous individuals for their assistance.