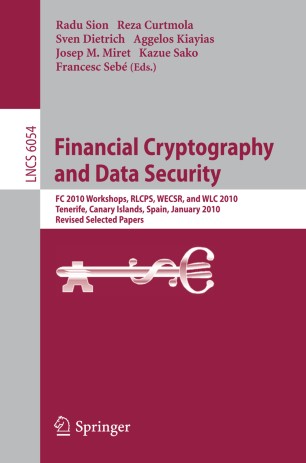 This volume contains the workshopproceedings of the accompanying workshops of the 14th Financial Cryptograpy and Data Security International Conference 2010, held on Tenerife, Canary Islands, Spain, January 25-28, 2010. FinancialCryptographyandData Securityis a majorinternationalforumfor research, advanced development, education, exploration, and debate regarding information assurance, with a speci?c focus on commercial contexts. The c- ference covers all aspects of securing transactions and systems and especially encourages original work focusing on both fundamental and applied real-world deployments on all aspects surrounding commerce security. Three workshops were co-located with FC 2010: the Workshop on Real-Life CryptographicProtocolsandStandardization(RLCPS),theWorkshoponEthics in Computer Security Research (WECSR), and the Workshop on Lightweight Cryptography for Resource-Constrained Devices (WLC). Intimate and colorful by tradition, the high-quality program was not the only attraction of FC. In the past, FC conferences have been held in highly research-synergistic locations such as Tobago, Anguilla, Dominica, Key West, Guadelupe, Bermuda, the Grand Cayman, and Cozumel Mexico. 2010 was the ?rst year that the conference was held on European soil, in the Spanish Canary Islands, in Atlantic waters, a few miles across Morocco. Over 100 researchers from more than 20 countries were in attendance.