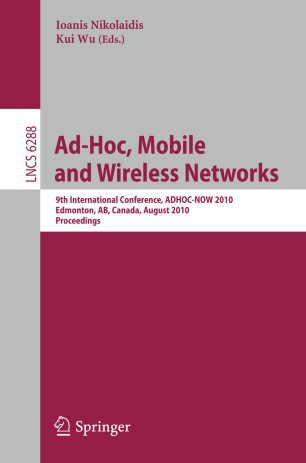 For more than a decade, ad hoc wireless networks have galvanized the interest and sparked the imagination of researchers. Such networks consist of a set of nodes equipped with wireless interfaces and they are designed to form self-organizing and spontaneous networks. They are usually multi-hop in nature, collectively forwarding and processing data to accomplish an application task. In addition, their topologies can be highly dynamic due to the potential mobility of the nodes. All these properties, in isolation and combination, pose a plethora of research challenges as well as new application opportunities. The International Conference on Ad-Hoc Networks and Wireless (ADHOC-NOW) serves as one of the premier venues for researchers and industrial practitioners to exchange ideas in this exciting area. Following previous ADHOC-NOW conferences in Murcia, Spain (2009), Sophia Antipolis, France (2008), Morelia, Mexico (2007), Ottawa, Canada (2006), Cancun, Mexico (2005), Vancouver, Canada (2004), Mo- real, Canada (2003), and Toronto, Canada (2002), the ninth ADHOC-NOW conf- ence took place at the University of Alberta in Edmonton, Canada, during August 20–22, 2010. As the capital city of the Province of Alberta, Edmonton is a cultural, governmental, and educational center and offers year-round world-class f- tivals, including the Edmonton International Fringe Theatre Festival. Edmonton is also home to North America's largest indoor shopping mall, the West Edmonton Mall. The summer in Edmonton is particularly joyful and has mild temperature and long, sunny daytime.