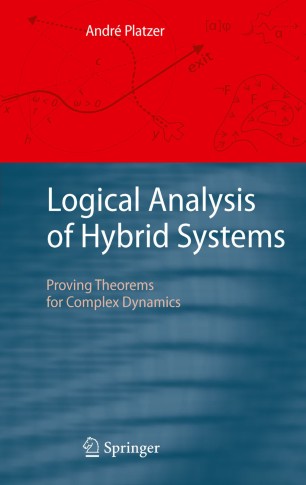 Hybrid systems are models for complex physical systems and have become a widely used concept for understanding their behavior. Many applications are safety-critical, including car, railway, and air traffic control, robotics, physical–chemical process control, and biomedical devices. Hybrid systems analysis studies how we can build computerized controllers for physical systems which are guaranteed to meet their design goals. The author gives a unique, logic-based perspective on hybrid systems analysis. It is the first book that leverages the power of logic for hybrid systems. The author develops a coherent logical approach for systematic hybrid systems analysis, covering its theory, practice, and applications. It is further shown how the developed verification techniques can be used to study air traffic and railway control systems. This book is intended for researchers, postgraduates, and professionals who are interested in hybrid systems analysis, cyberphysical or embedded systems design, logic and theorem proving, or transportation and automation.

The author is an assistant professor in the Computer Science Department at Carnegie Mellon University. He has an M.Sc. in computer science from the University of Karlsruhe, Germany and a Ph.D. in computer science from the University of Oldenburg, Germany. Among other awards he won best paper awards at the Tableaux 2007 and FM 2009 conferences, he was among Popular Science Magazine's annual "Brilliant 10" in 2009, he received the ACM Doctoral Dissertation Honorable Mention Award in 2009, he was among the IEEE Intelligent Systems' biennial "AI's 10 to Watch" in 2011, and he received an NSF Career award in 2011. His research interests include the logical foundations of cyberphysical systems, theorem proving and model checking.